As a simple hot sausage on a roll, hot dogs have no real beginning, but their long association with New York has a few milestones in food    history. One early claim for its introduction is at the Polo Grounds (157th St. and Harlem River, Manhattan) by the food concessionaire Harry M. Stevens.

In 1871, Charles Feltman may have introduced the hot dog from a pushcart, outfitted with a heated pot, that he wheeled along the shores  of Coney Island. 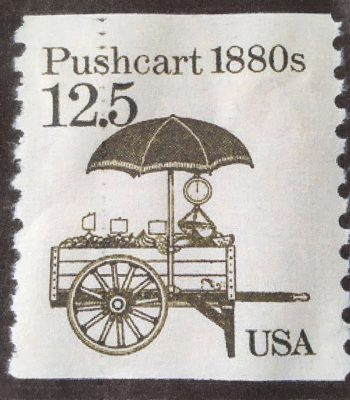 Mayor Impellitteri (1950–1954) and Mayor Wagner (1954-1966) changed the face of markets by changing the face of the City, with housing development and Robert Moses’s planning.

Mayor Koch’s father was a pushcart peddler, but during his term he greatly increased pushcart regulation, from capping the number of available licenses to limiting pushcarts to cross streets and restricting locations.

Mayor Giuliani (1994-2001) started enforcing a multitude of laws, in the spirit of LaGuardia, that had long been ignored. His actions culminated in a proposal rid all peddlers from New York City street corners and relocate them in open-air-style markets. A ban of vendors from 42nd Street to Wall Street did take place, but was modified due to public outcry.

Mayor Bloomberg (2002-2013) has made it illegal for police to challenge citizenship of vendors as part of enforcement, but the number of tickets issued to vendors has not decreased. Restrictions are still arcane, complex, and hard to interpret for both vendors and police trivia